HMAS Otway is an Oberon-class submarine whose above-the-waterline casing, fin and stern are now located far inland at Submarine Park, Holbrook, alongside the Holbrook Submarine Museum.

Visitors can immerse themselves in the submariner experience in the Holbrook Submarine Museum, and see for themselves the cramped living and working spaces of a submarine's interior. They can also view the various devices necessary for sustaining life for long periods underwater.

The museum’s extensive collection of submarine-related objects demonstrates the camaraderie generated by the unusual living and service conditions of those who have served in submarines. Items include cartoons and T-shirts, ships' crests, and other devices associated with the submarine branch of naval service. 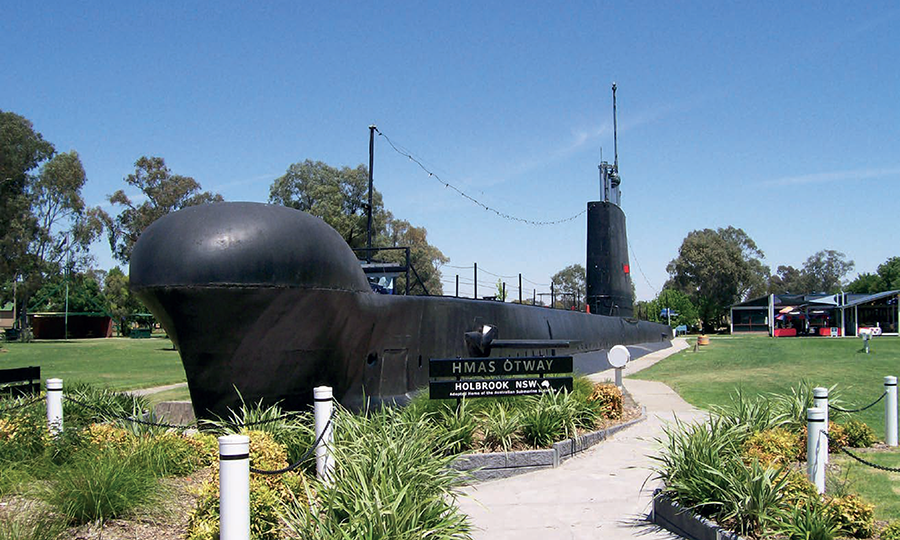 The museum also tells the story of Royal Navy Lieutenant Norman Holbrook, the commander of a British submarine, B11, which penetrated the Dardanelles on 13 December 1914 and destroyed a Turkish battleship, the Mesudiye. Lieutenant Holbrook was awarded the Victoria Cross for this action, portrayed by a hologram in the museum.

'Holbrook' was chosen to replace the town's original name of 'Germanton' during World War I, when anti-German feeling ran high in Australia. Norman Holbrook and his wife Gundula visited Holbrook many times, and the relocation of HMAS Otway to the town owes much to Mrs Holbrook's generosity.