Heidelberg School artist, Tom Roberts, who painted shearers and rouseabouts at Brocklesby Station in 1890 for his famous work, Shearing the Rams, employed his paintbrushes just over ten years later in capturing a more formal subject - the opening of the First Parliament of the Commonwealth of Australia on 9 May 1901 by the Duke of Cornwall and York.

The Duke, who later became King George V, is the focal point of Roberts’ vast canvas, pictured addressing the assembled dignitaries from the platform of Melbourne’s Exhibition Building.

The Duchess of York stands behind him. She is in mourning dress, as are the other women present. The Duke’s grandmother, Queen Victoria, had died just weeks after the inauguration of the Commonwealth of Australia was celebrated in Sydney on 1 January 1901. 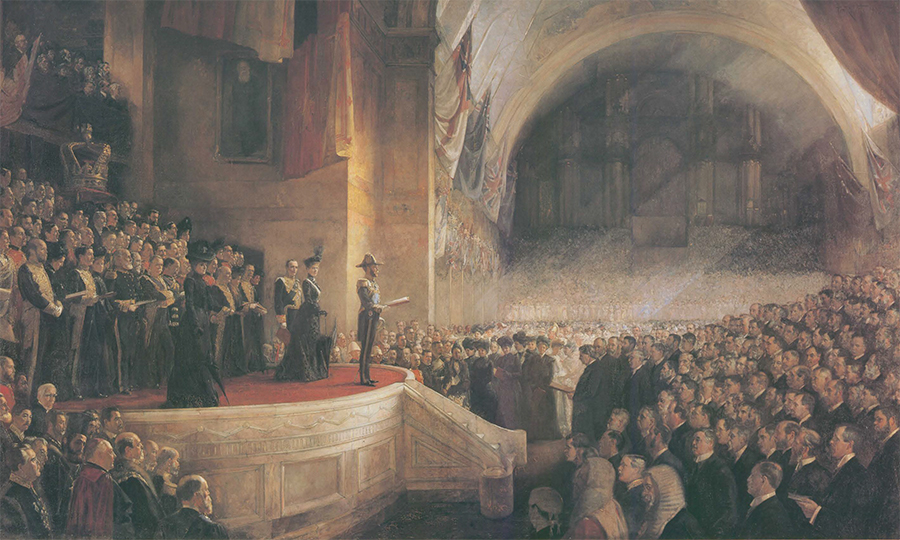 Behind the Duchess is the Governor-General, Lord Hopetoun, and behind him and in the body of the hall are Members of Parliament, state governors, judges, mayors, diplomatic representatives and other dignitaries.

There are even portraits of people who were not present but who had played key roles in the Federation process - including Sir Henry Parkes, the ‘Father of Federation’. Parkes had died six years before, but including him in this pictorial record was considered appropriate.

Roberts was commissioned to paint 250 individual portraits for a fee of 1000 guineas, fitting each one into the overall composition. He went to London with the painting, and completed it there in 1904. It was presented to the Commonwealth, and then to the King, and did not come to Australia until 1960. The painting is on permanent loan to the Parliament of Australia from the British Royal Collection, and is now on display in Parliament House, Canberra.