Postal Inspector Reginald Turner (1892-1959) was one of at least seven men who were presented with cigarette cases, some gold, some silver, in Dean Square, Albury on 13 December 1934 by the leader of a delegation from Batavia (now Jakarta) in the Dutch East Indies, navy Captain H. Sluiter.

The delegation had come to Albury with an array of lavish gifts as an expression of gratitude for the role played by many Albury people on the morning of 24 October 1934 in saving the Dutch plane, KLM Douglas DC-2 Uiver, which had become lost over Albury during the London-Melbourne Air Race. 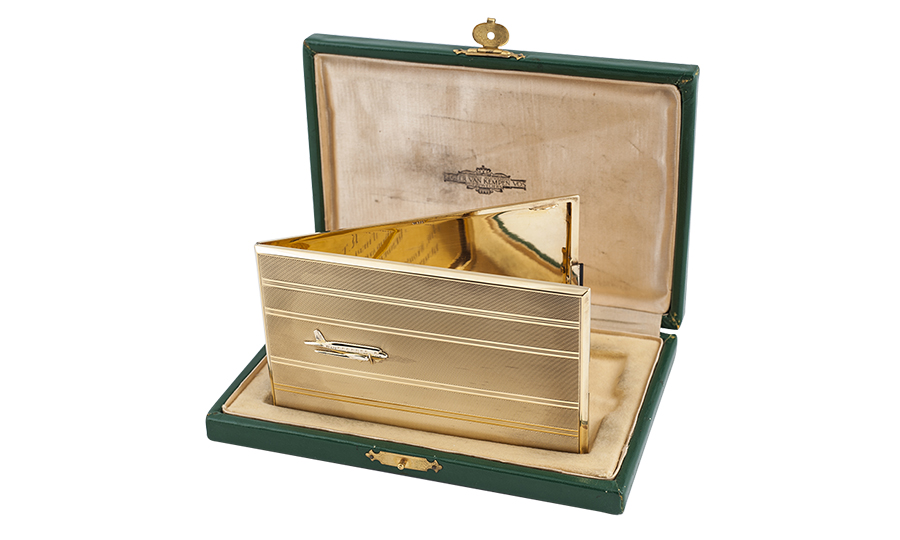 At around midnight, Reg Turner, who was familiar with Morse code, went to the Albury Post Office, where he met Border Morning Mail sub-editor Clifton Mott and municipal electrical engineer Lyle Ferris, who were hoping to find someone who knew Morse code. Together they went to the nearby electrical sub-station, where Ferris made it possible for Turner to manipulate the town’s power supply switch to spell the word ‘ALBURY’ in Morse code, and so flash the street lights in an attempt to let the lost plane know its location. After the safe landing of the Uiver on the Albury Racecourse, Turner facilitated the sending of telegrams by Uiver pilot Captain Koene Parmentier and German passenger, aviatrix Thea Rasche.

The gold cigarette case, with an inlaid gold representation of the Uiver, was made by Ned-Indische Maatschappij, Begeer van Kempen Vos. On the inside is engraved the following:

PRESENTED TO R. TURNER
BY FRIENDS IN THE NETHERLANDS EAST INDIES IN
TOKEN OF THEIR ADMIRATION FOR THE DISTINGUISHED
SERVICE RENDERED TO THE AEROPLANE “UIVER”
IN THE STORMY NIGHT AT ALBURY OCTOBER 23RD 1934
DURING THE LONDON-MELBOURNE AIR RACE

Donated by Jennifer McIntyre and John Turner for display in memory of their father, Reginald Turner.