This late 1890s bright purple gown with decorated bustle was worn by Mrs. Horner of Corowa. The jacquard woven design and scalloped pink edges is a feature with the cream bow trims in the same tone.

It is a wonderful example of Victorian design. Bustles were in high fashion from the mid-late 1800s. Worn under the skirt in the back and just below the waist, it was designed to keep the skirt from dragging and to give the wearer the shape of the time. The bustle had completely disappeared by 1905, as the long corset of the early 20th century was now successful in shaping the body to protrude behind. 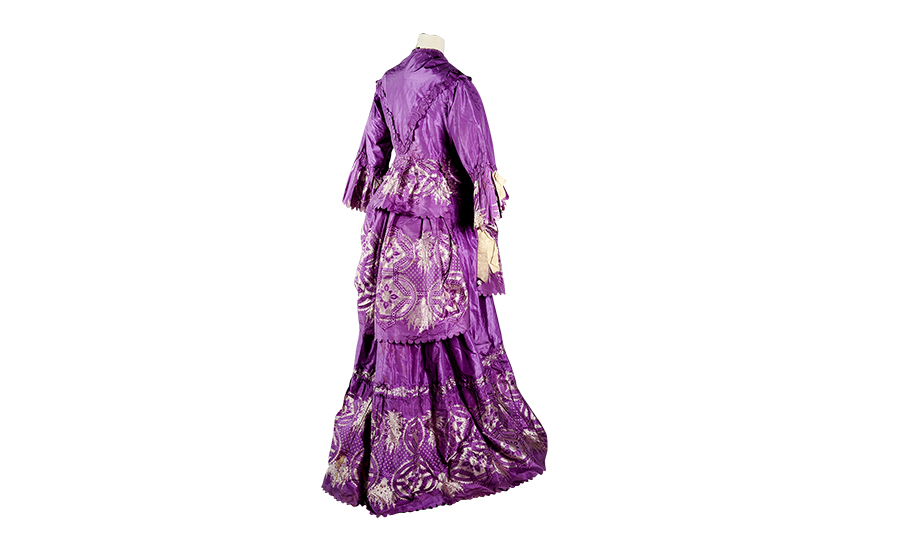 The dress was possibly worn during pregnancy. There isn’t much material written about pregnancy in Victorian times, as the topic was off-limits, however the design of the dress, and the way the skirt is sized and shaped, indicates it was worn during such a moment. Although pregnancy was a very private matter, women still needed to live their lives as usual, and their wardrobe would have been altered to suit this.

The bodice originally featured a large lace collar and a V neck at front; it was altered when the fashions changed.