Shearing the Rams, by Tom Roberts, is a distinctly Australian scene. It evokes strong masculine pastoral life and labour, as well as recognising the role the wool industry played in the development of Australia.

This painting was modelled on ‘Brocklesby Station’ at South Corowa. Roberts visited the station in 1889 and 1890 after he met the owner, Alexander Augustus Anderson, on board the SS Lusitania.

Brocklesby was a huge station, located at Killeneen on the Rennie road. Roberts set up his easel there and paid a handful of local people to pose as models. He worked for two seasons (1889 - 1890) in the woolshed as the shearers worked, and completed the artwork at his Melbourne studio. Many locals are depicted in the painting. Anderson is in the background, the boy on the left is John Henry Detlefson, the first shearer is John Coffee, behind him is Jack Wise, and the overseer crouching on the right is Frances Barnes. 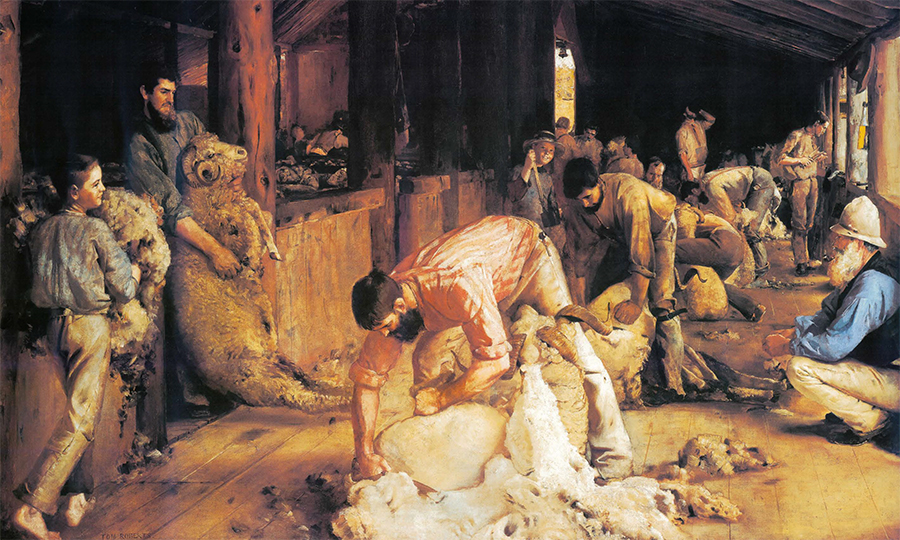 Another model was nine-year-old Susan Davies, who was the ‘tarboy’ at the centre of the painting. It is said that Roberts included Davis because she and her sister had been up to mischief in the shed. Another account is that she was asked to sweep up the floor to create a dust haze to suit the purpose of Roberts’ work. Either way, the local Corowa girl became a part of this iconic Australian image.

The original painting is now in the collection of the National Gallery of Victoria and is one of its most popular pieces of Australian art.