The stein is made from irdenware (earthenware or stoneware). It is hand-painted with the insignia of the regiment and depicts the activities of the infantrymen. The name of the owner, Inftr. Frdr. Laur (Infantryman Friederich Laur), is painted on the lower section of the stein. Around the base is an inscription which reads ‘Es lebe hoch das Regiment das sich mit Prinz Leopold nennt’ (Long live the Regiment that calls itself with pride Prince Leopold).

The stein would originally have had a pewter lid. The metal lids were generally cast metal and fairly heavy, often causing damage to the rim of the stein. 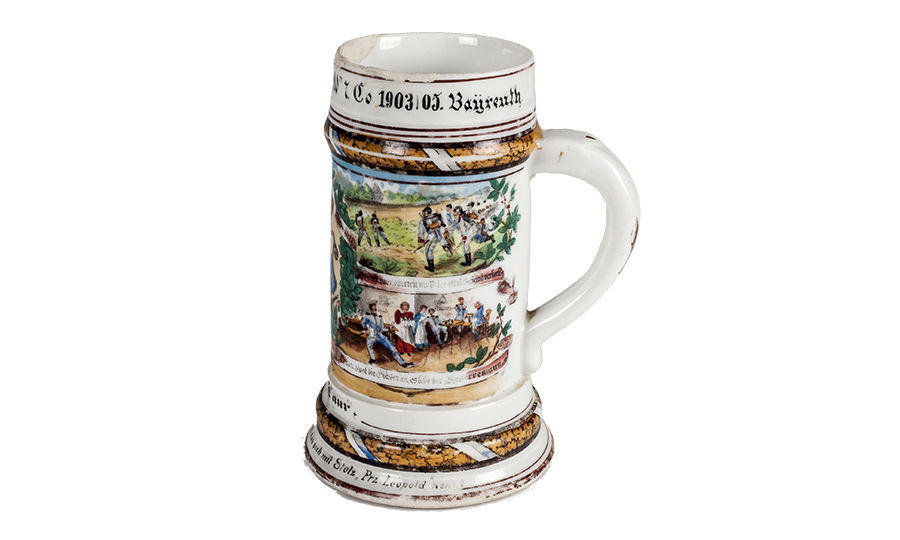 The majority of German regimental beer steins were produced between about 1890 and 1914. During this time, military service was compulsory in Germany. Most men took basic training between the age of 17 and 20, and then entered the reserves until age 40. A group of men entered a unit together, stayed in the same unit for training and were discharged as a unit. This sense of togetherness fostered the custom of buying souvenirs with the unit name, insignias and decorations as keepsakes of military service. Many souvenir items were available, including pipes, clocks, flasks and especially steins. Rosters of names from one’s unit, or regiment, could be added to the steins.

The beginning of World War I ended the production of regimental steins, as labour and materials were diverted to the war effort.